Sheikh Abdurrahman Aktepî (1842-1910) was born in the Çınar district of Diyarbakır. He was a Naqshbandi-Khalidi sheikh. He was also a lecturer, researcher and poet. He has written crucial works in many different fields. Most of his works are in Arabic. However, he has two Kurdish/Kurmanji works. One of them is the Divan. The name of the Divan is “Divan of Ruhi” and it has been written in classical style. Along with different subjects, he has focused more on divine love in his Divan. He has utilized a lot from symbols in his poems themed mysticism and love. These symbols are mostly animals, plants, personality and beauty elements. In this study, we are going to focus on the group of plants. There are trees, fruits and flowers in this group. These symbols are mostly used for lover and for its beauty elements in classical poetry. Aktepi has also likewise given place to such metaphors. Aktepi has given place 14 symbols in this field. Some of them have been studied from only one aspect, some of them from several aspects. We will talk about all the different meanings they have that are loaded on them and give examples of same types one under the other. In this way, Aktepî’s literary view of plants will be better seen and understood. 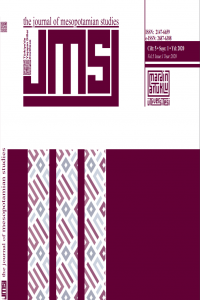